Thinking up ideas for articles on SourceCred. I posted a fun thought experiment, SourceCred as Store-of-Community Value (SoCV) , but was thinking something more concrete would make a better article. Below are a couple article ideas if anyone has any thoughts. Note: the headlines and paragraphs are just rough sketches of the ideas, and not set in stone.

Revenge of the DAOs: How Meritocracy Will Destroy Big Tech

Tech is not a meritocracy. What if there was actually a way to accurately measure value, down to smaller contributions? I’ve spent the last eight months working for a cryptocurrency DAO (Decred). It’s the closest thing to a meritocracy that I’ve found. And very different from VC-backed tech startups I’ve worked at. It does a much better job at rewarding value, with much lower transaction costs. Recently, I’ve been exploring a tool (SourceCred), which could take this a giant step further. It uses Google’s famous page rank algorithm to measure value. It’s still just a prototype, but it works spookily well. Try it out for yourself (link). In this article I explore the ramifications of how such technology, combined with cryptocurrencies, pseudononymous identity, and governance, will outcompete big tech by lowering transaction costs and offering their workers something big tech can’t: control over their life.

This article explores Wasabi Wallet’s ‘Contribution Game’ experiment, where 1 BTC was given away to contributors based on contributions to its GitHub. While a somewhat crude metric (+/- lines added/deleted), it was successful in attracting contributions. We compare the scores (and amounts of BTC paid based on them) to SourceCred’s scores, and try to engage the Wasabi Wallet maintainer and contributors for feedback/thoughts, as well as incorporate SourceCred contributor insights, possible tweaks to the weights.

Between these two, I like the first pitch a lot more. I think focusing on Wasabi wallet overmuch isn’t great for a piece intended to showcase SourceCred – they didn’t actually use SourceCred, and Wasabi Wallet isn’t that well known, so it would wind up being PR for them perhaps moreso than us.

On the other hand, the first one has a lot of intriguing bits. I think this piece is a nice hook:

Recently, I’ve been exploring a tool (SourceCred), which could take this a giant step further. It uses Google’s famous page rank algorithm to measure value. It’s still just a prototype, but it works spookily well. Try it out for yourself (link).

There’s always the question of audience with outreach like this. What if we assume that the audience is ppl pretty invested in the cryptospace, who already know what DAOs are. Then we could just focus the post on “SourceCred will revolutionize DAOs by letting them pay for labor” vs the polemical about big tech. Not that I disagree on the polemical–but focusing more on the value proposition of SourceCred would make it a better fit for the SourceCred blog (vs going on your personal blog) which I think is higher leverage if we can get the tone right.

What do you think? Also I welcome everyone else in the community to chime in… building our messaging is really important for the project.

Makes sense. DAOs are a hot topic these days, and I think an article like this could reach a large audience. Below I’ve sketched out a (very) rough outline. Just my first thoughts. Open to ideas.

DAOs are exploding, with lots of different experiments being tried. Measuring the value of contributions is central to their success. In this post we look at how SourceCred can compliment emerging DAO models…

Roughly categorize existing DAOs, perhaps using an existing taxonomy someone else has created, or create our own basic categories. E.g. traditional employment contracts through a foundation (e.g. Aragon, EF), Decred DAO (shareholder governed co-op), donation model (e.g. Bitcoin’s HardCore fund), WasabiWallet’s use of GitHub lines added/deleted., DAOs created on Aragon or other smart contract platforms that can issue tokens or pay directly based on cred scores (e.g. SC and Chainlink mashup (if we get picked up by the Link marines on Twitter this gets lots of views)) etc. Then show use cases that could compliment each, starting with the most restrictive in terms of use cases (e.g. compliment to traditional contracts and foundations), and go all the way to most applicable (i.e. DOA could use all functionality the other examples use as well).

E.g. for orgs that keep a traditional employment contract (not using SC to direct payments). SC can be used for (for example):

For DAOs whose primary function is voting on how to manage budgets, manage who is in the DAO (e.g. Moloch), SC could be used to measure the performance of grant recipients generally, used by recipients as a reporting tool, or possibly be used to measure progress towards project goals (KPIs). Are there any posts on this already I can reference? If not start a discourse post to collect ideas on how this could be done?

For DAOs looking to experiment with SC to direct payments:

“While SC is fairly new, and not recommended for running money on yet without careful consideration, it could offer advantages over existing models…” Notably, it is more permissionless (and therefore accessible and possibly equitable), and significantly lowers transaction costs in a number of areas (recruiting, contract negotiation, contract enforcement/renegotiation, accounting, etc.). Could use WasabiWallet as an example of an org that is experimenting with this, reusing some of my content already created. Maybe announce the little experiment of SC paying a small amount by cred as an experiment? That could give the blog a little oomph (could also be saved for a separate piece if we want to elaborate on that).

Re: wasabi, FYI I re-ran SC on their repo to get the latest scores (their contributor game is only 5 days from completion). Did an experimental little Tweet storm “reporting” on the scores, in a loose, play-by-play narrator voice, @ing the maintainer and the devs whos work I mentioned, hoping to engage them and get feedback. 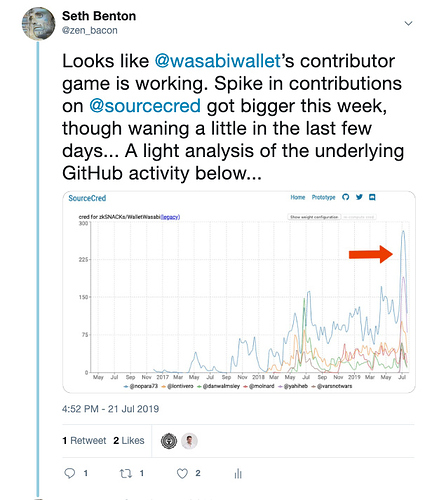 Unlike my initial Tweets (which got RT’d and upwards of 7k views apiece), this one didn’t get much response at all (1 like from a dev). Realized I’d accidentally posted into some epic Twitter drama that got so heated it bubbled up into a CoinDesk article. Basically another privacy wallet calling them out for some alleged security vulnerability. That apparently is what caused the big spike in cred scores that was forming in response to the contest (hosted chart) to pop. The maintainer was presumably too busy battling to review PRs. Data science Q: Is cred inversely related to Twitter drama?