This morning, I sat in on a call where @jwaup was demo’ing SourceCred to members of the Enigma community. It was quite interesting to be on the other end of a demo, and it was interesting to see how the community was thinking about SourceCred, so thought I’d share some notes from the call. @jwaup please correct me if I get anything wrong!

Use cases being explored

Enigma just launched a blockchain using Cosmos, which includes an on-chain governance system. It uses coin-weighted voting, which has raised concerns for some around plutocracy (as it does). SourceCred could potentially mitigate this by scoring the reputation of validators and delegators in the network (e.g. which delegators are actively contributing to the network). Cred scores could also be used to inform funding decisions and other decisions on the social layer (e.g. someone submitting a proposal can present their cred score to prove they’re an active member of the community).

Reactions were generally positive. Some questions around the meaning of weights, how to prevent gaming. A community member seemed to find the SourceCred instance surfacing interesting insights (as it does:).

"“When is guy going to pull his weight!”

Thank you @s_ben for joining that discussion, answering questions from the Enigma community, and sharing this feedback! Here is an update: 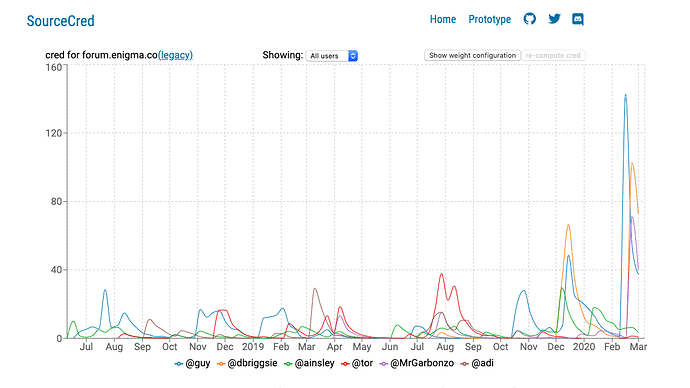 Multifactorial Governance Enigma recently launched a blockchain using the Cosmos SDK, and we implemented this gov module for on-chain proposals. It uses coin-weighted voting, which means every SCRT coin is worth a number of votes. In other words,...